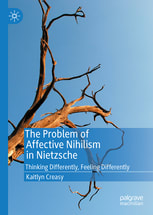 ​Nietzsche is perhaps best known for his diagnosis of the problem of nihilism. Though his elaborations on this diagnosis often include descriptions of certain beliefs characteristic of the nihilist (such as beliefs in the meaninglessness or worthlessness of existence), he just as frequently specifies a variety of affective symptoms experienced by the nihilist that weaken their will and diminish their agency. This affective dimension to nihilism, however, remains drastically underexplored. In this book, I offer a comprehensive account of affective nihilism that draws on Nietzsche’s drive psychology, especially his reflections on affects and their transformative potential. After exploring Nietzsche’s account of affectivity (illuminating especially the transpersonal nature of affect in Nietzsche’s thought) and the phenomenon of affective nihilism, I argue that affective nihilism might be overcome by employing a variety of Nietzschean strategies: experimentation, self-narration, and self-genealogy.
​
Paperback edition published in June 2021.
Reviews:
(i) Lawrence Hatab, Journal of Nietzsche Studies. (2022)
(ii) Paul Katsafanas, Notre Dame Philosophical Review. (forthcoming)
(iii) Rebecca Bamford, Human Studies. (forthcoming)
Selected Papers
"Making Knowledge the Most Powerful Affect: Overcoming Affective Nihilism" in the Journal of Nietzsche Studies. Volume 50, Issue 2. (2019)

After briefly re-introducing the problem of affective nihilism in Nietzsche and detailing a variety of its forms, I identify and investigate potential Nietzschean strategies for jump- starting the agency of the affective nihilist and overcoming affective nihilism. By attending to Nietzsche’s own practices and recommendations, I locate strategies that might enable the affective nihilist to will and, eventually, to transform herself. The two strategies I investigate include 1) “living experimentally” by placing oneself in a variety of potentially stimulating climates and contexts and 2) undertaking particular practices of self-knowledge, especially the formation and reflection upon a personal narrative. Both of these strategies employ the production of affect in an individual to potentially energize one’s will and stimulate one’s drives.​

"On the Problem of Affective Nihilism" in the Journal of Nietzsche Studies. Volume 49, Issue 1. (2018)

Bernard Reginster has argued that Nietzschean nihilism is best characterized as a "philosophical claim." This account has inspired a number of critical responses. While Reginster's characterization presents nihilism as a purely cognitive phenomenon, involving particular beliefs about meaning and value, it is just as frequently presented by Nietzsche as a feeling-based phenomenon, a weariness with one's world that comports one negatively toward the world. How, then, should Nietzsche's reader understand the problem of nihilism in his thought? In this article, I examine Nietzsche's account of drives, affects, and the relations he establishes between them to show that nihilism must be understood not only as involving particular beliefs, but as a psychophysiological condition, which I call, following Ken Gemes and John Richardson, affective nihilism.

This paper presents David E. Storey’s foundation of an environmental ethic on Nietzsche’s philosophy of life in Naturalizing Heidegger as a version of new conservationism. Critically examining Storey’s various claims, this paper demonstrates potentially problematic aspects of the new conservationist project. In order to both question Storey’s interpretation of a Nietzschean philosophy of life and problematize the new conservationist understanding of nature, this paper returns to the work of philosopher Friedrich Nietzsche. In particular, it argues from a Nietzschean perspective that the new conservationist projection of human teleology and values onto wild nature and non-human life results in a nihilistic conception of wild nature.
​
Review of David E. Storey's Naturalizing Heidegger: His Confrontation with Nietzsche, His Contributions to Environmental Philosophy. Journal of Nietzsche Studies 48.1 (Spring 2017), 144-149.
​
Review of Mark Anderson's Plato and Nietzsche: Their Philosophical Art. Ancient Philosophy 36 (2016), 226-230.